Stay in the Game; Use a Designated Driver
Share:

Are you prepared for Super Bowl LVI? Whether you’re cheering for the Cincinnati Bengals or Los Angeles Rams, every Super Bowl party must kickoff with a game plan that prevents drunk driving.

On Super Bowl Sunday, and every day, play it smart by having a winning game plan in place to not drink and drive. We will all win if we follow these keys to the game: 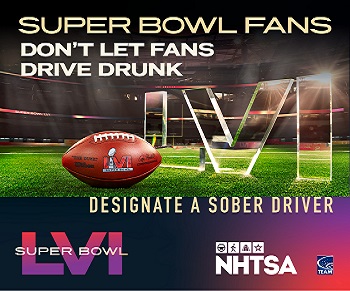 It’s illegal to drive with a blood alcohol concentration of .08 or higher. When it comes to drinking and driving, law enforcement doesn’t throw a yellow flag; they throw the playbook at you. You’ll get pulled over, arrested, and prosecuted. Your wallet takes a big hit, too: the average DUI court case costs about $10,000.

Defense wins championships; your best defense is to plan for a sober ride. From taxis and ride shares to public transportation and designated drivers, run the play that will score you home safely.

Be a Party MVP

Volunteer to be a designated driver. Let your team know that you’ll be there for them when the party’s over with a safe and sober ride home.

If You’ve Been Drinking, You’re Benched

There’s no place on the road for anyone who has been drinking. If someone tries to drive after drinking, tell them to ride the bench until you help them find a sober ride home.

Be the Head Coach When Hosting

Take care of the designated drivers and provide plenty of food and non-alcoholic drinks. Most importantly, make the game-winning call: intercept their keys before they drink.

We all have the same game plan when it comes to preventing drunk driving. And always buckle up. Your seat belt is your best defense if you’re in a crash.